Anne enjoys many different forms of art but over the past ten years has concentrated on working with fused glass. This is a technique she began in Northern Ireland at the Flowerfield centre in Portstewart shortly after completing an art foundation course, UUCertHE in Fine and Applied Art, in 2007. On moving to the Cairngorms National Park in 2010 she found no local glass kiln so bought her own and started selling her work commercially from then. By 2015 she needed a second kiln!

Anne is a scientist (virologist) by training and finds that glass fusing satisfies her creative urges while also requiring a scientific approach to experimenting with firing programmes. She loves colour and her work is bright and colourful, rather than subtle! It encompasses jewellery, coasters, bowls and wall hangings, and she also welcomes commissions.

Anne held an exhibition in 2008 at the Riverside Theatre, University of Ulster on viruses and art, funded by the Biochemical Society and also showed part of this work at the Society for General Microbiology 2009 Spring meeting. She regularly exhibits her paintings and glass work with Creative Cairngorms and the Society of Badenoch and Strathspey artisits (SBSA). "http://www.creativecairngorms.co.uk" and "http://www.theionagallery.co.uk"

Her work is/has been found at the following venues: 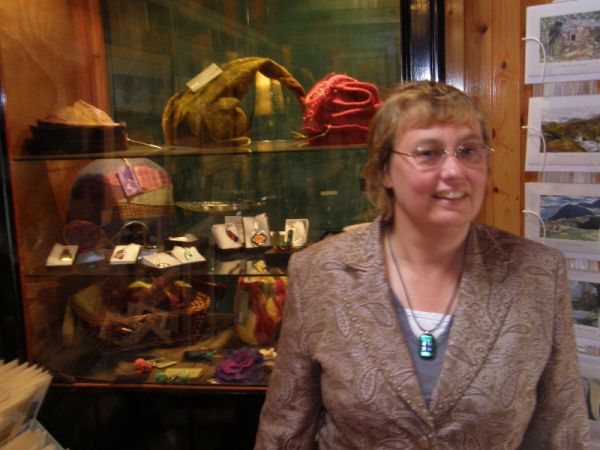 Anne at Loch an Eilein gallery
Next
Previous